Michael Bell Jr had a tragic run-in with law enforcement in 2004. What happened after his encounter left him dead and his family searching for answers. Unfortunately for his family and particularly his father, Michael Bell Sr, was a plethora of unanswered questions and what seemed to be a lack of transparent investigation. 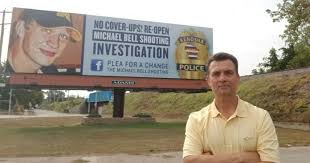 In Nov 2004 Michael Bell Jr was stopped by Kenosha, WI police officers for an unknown reason. A few minutes later a fight between Michael and law enforcement found all parties in the driveway of Michael’s home. At some point, an officer screamed to his partners that Michael had tried to grab Michael’s gun. Believing that Michael was trying to steal an officer’s gun, a fellow officer then shot and killed Michael Jr.

Michael Sr., a major in the U.S Airforce at the time, thought a thorough and impartial review of the facts and circumstances would follow and justice would prevail. That apparently did not happen. According to Michael Sr., two calendar days after the incident, without having interviewed all witnesses and without having received all forensic and medical reports the chief of police and the district attorney stated that the shooting was justified.

Dissatisfied with the investigation Michael Sr. has been on a crusade for the truth in the matter. His efforts have led to reforms such as the State of Wisconsin being the first state in the union to mandate that when there is a police-involved shooting resulting in death, that that police department cannot investigate itself. Michael Bell Sr. is also trying to implement a National Transportation Safety Board (NTSB) style investigation into all police-involved homicide investigations. This type of investigation would be impartial and dedicated to finding facts and fault no matter where it lies.

Take a listen to the episode and got to Michaelbell.info and Facebook/Plea4change for more information.